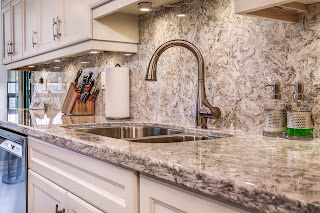 As we mentioned in last week’s blog post, our clients were transitioning from a large house – one that included a sizable kitchen – into a condo and wanted to ensure that there would still be space for everything in their new home. Once Monarch designer Amanda Willson-Suppa laid eyes on the space, she knew exactly what to do.

“The original kitchen was divided and broken up to include a dry-walled closet and pantry area,” explains Amanda. “In condos, walls are often fixed…but we lucked out and were able to move one small wall. In fact, we chose to take it out altogether, and created a very functional galley kitchen.”

The fridge was moved slightly down the wall allowing more cooking and prep space around the stove.

The very large pantry closet was transformed into functional kitchen pantry storage, adding depth and function with the use of pull-outs.

“Just like in the master bathroom of this condo, this kitchen has more storage space than a lot of kitchens that are larger in size,” says Amanda.

"In addition, the ceilings in this space were raised, giving the homeowners a space that is larger and airier. This was also the goal with the finishes that were selected."

Cambria quartz counter tops were used throughout the home. White cabinetry was selected for a timeless, open look. As well, the porcelain flooring tile is a nice light grey and in order to brighten the space.